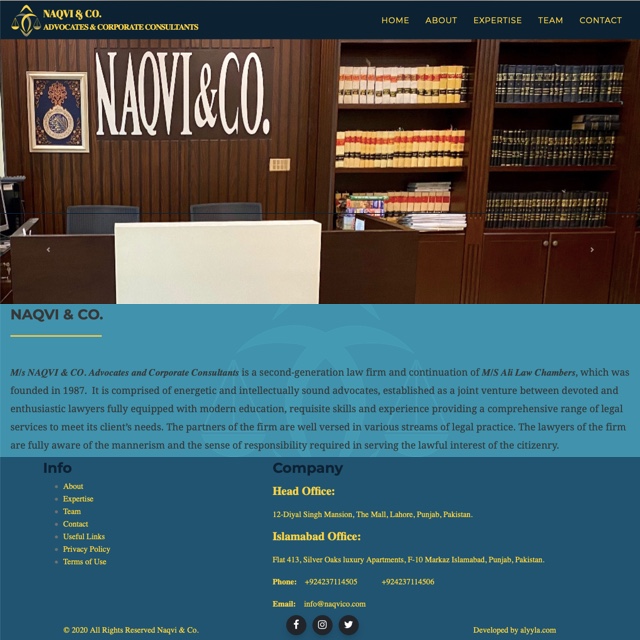 NAQVI & CO. Advocates and Corporate Consultants. It is comprised of energetic and intellectually sound advocates, established as a joint venture between devoted and enthusiastic lawyers fully equipped with modern education, requisite skills and experience providing a comprehensive range of legal services to meet its client’s needs.

1st on Apple App Store Quran Share Pro in orignal script Arabic (القرآن‎ Al-Quran) in 3 Translations: Transliteration, Urdu and English. Quran is the book of divine guidance revealed from God to last Prophet Muhammad (pbuh) through the angel Gabriel over a period of 23 years and view the Quran as God's final revelation to humanity. 609 CE - 632 CE The Quran describes itself as a book of guidance for mankind 2:185.

1st on Apple App Store, Dua-e-Jawshan (Arabic: دعا جوشن) in original Arabic script and transliteration with translation both in Urdu and English languages. Bald al Ameen o Misbaah Kaf'amee relates from Fourth Imam Zayn ul Aabideen [as] who narrates from his father Imam Ali [as] who heard the Prophet Muhammad [saww] say that Angel Jibrael [as] brought this Dua to the Prophet [saww] during a battle when Prophet [saww] was wearing an uncomfortable armour.

1st on Apple App Store, Dua-e-Kumail (دعاء کمیل) in Arabic (original) with translation in English, Urdu and Persian. Dua-e-Kumail (دعاء کمیل) is famous after the name of Kumayl Ibn Ziyad Nakha'i who was a confidant amongst the companions of Imam Ali Ibn Abi Talib (a.s.) and this sublime Du'a was first heard from the beautiful voice of Imam Ali (a.s.).

1st on Apple App Store, Dua-e-Mashlool (Arabic: دعإِ مشلول), in original Arabic script with translation in English, Farsi, Urdu languages and also transliteration. This dua known as 'supplication of the youth stricken for his sin,' is quoted from the work of Kaf-ami and from Muhaj al Da-wat by Sayyid ibn Tawus.

1st on Apple App Store, Hadis-e-Kisa (Arabic: حدیث کساء) in Original Arabic script with translation in three languages i.e., English, Urdu and Persian. Prophet Muhammad (s.a.w.s.) met with the Commander of the Faithful, Imam Ali (a.s.), Lady of Paradise, Bibi Fatima Zahra (s.a.), Chiefs of the Youths of Paradise; Imam Hasan (a.s.) and Saiyyadush Shuhada Imam Hussain (a.s.) and covered all of them under a cloak and prayed to Allah: "O Allah! These are my Household (Progeny), please keep all impurity away from them".

1st on App Store, an anthology of (Persian : فارسی) mystic poetry by Hazrat Lal Shahbaz Qalandar (حضرت لعل شهباز قلندر) with (Urdu : اردو) translation.
Qalandar means Free of Boundaries. It is a common known fact that Qalandar could let himself free from the power of gravitational pull and hence used to fly and that is another reason why he was called (Shahbaz : شهباز).

1st on Apple App Store, 'Saif-ul-Malook' (سیف الملوک) - a phenomenal mystic poetry (صوفیانہ کلام) in original Punjabi script by Mian Muhammad Bakhsh, a renowned Sufi saint and Punjabi poet. Mian Muhammad Bakhsh was born in Kharri Sharif (کھڑی شریف), a village in Azad Kashmir. He mentions himself in this book that he completed the work in the month of Ramadan, 1279 AH (1863 AD), at the age of 33 which suggests his birth in 1829 or 1830.

1st on Apple App Store, iMessage stickers of 99 names of Allah revealed in the Quran. Almighty Allah has taught 99 names of Himself to the mankind in the Quran, the last heavenly book revealed upon the last prophet Muhammad p.b.u.h.

1st on Apple App Store, iMessage stickers of 99 titles of Imam Ali found in the books of Islam. These names are mainly pronounced by the last prophet Muhammad p.b.u.h. for Imam Ali (a.s.) on several occasions through the course of his life. The sources of these names are mainly Books of Hadith and Islamic history.